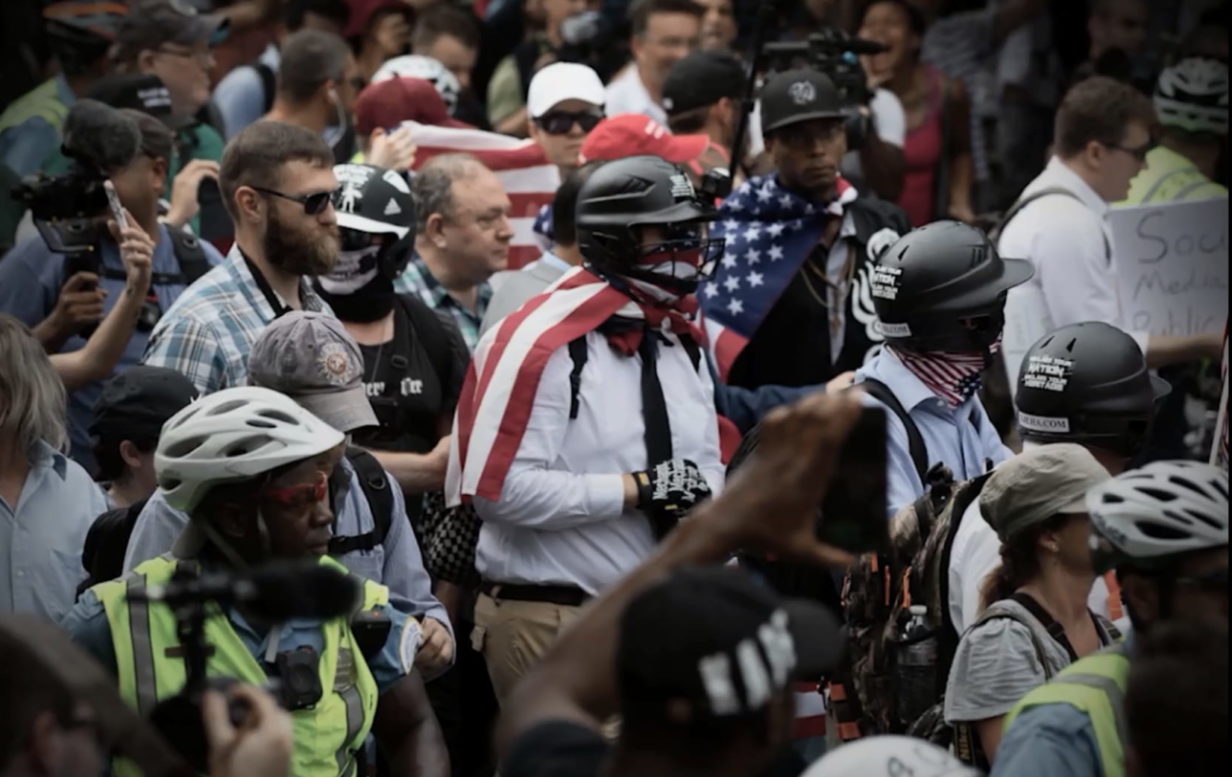 The mainstream media promoted the 2018 Unite the Right Rally as the ultimate gathering of racists. One news organization talked about the hatred and chaos that was descending upon Washington D.C. The stories currently are very different. The media has boastfully proclaimed the Unite the rally a “flop”. They arrogantly and proudly claim how much of a “failure” the rally was, how there were only a few dozen demonstrators, compared to the thousands of counter protestors converging the nation’s capital. The counter protestors, represented by Antifa, Black lives Matter and other bands of brainwashed, low IQ individuals who are brought together by their sheer lack of intelligence filled the air with hypocrisy.

It’s ironic that humanity currently lives in the age of information, where all the knowledge ever recorded in history can be accessed at the literal flick of a finger. Yet, so many are swayed by false information that has been twisted into a false narrative designed to create an illusion in the minds of the public.

Members of the New Jersey European Heritage Association were in attendance at the demonstration and marched alongside Jason Kessler, who was witnessed surrounded by several colored individuals whom he had invited to the event. Despite this, most of the media’s coverage of the rally has repeatedly spewed out labels such as KKK, Nazis and White Supremacists. They called the group racist, bigots, they worked a large population of the entire nation into a frenzy about what they call “alt-right”. One Washington Post headline reads, “Alt-Right Flops while Left Triumphs”. This is all just small proof that the mainstream media’s allegiance lies with radical leftist provocateurs who destroy the rights of others, any property and peace while they hurl lewd insults and foreign objects then burn American flags all while chanting “No USA at All”. Surely, those words will return to haunt them. They may be seemingly laughing at how small the number of demonstrators was but surely many also laughed at the great men who founded this nation.

It has become clear in recent times that the political climate around the world has been shifting increasingly further into right and left. Since WWII, the Western world has enjoyed a period of unparalleled peace, surmounted by unrivaled prosperity. This fact, coupled with the fallout of globalism spilled over as a result of the war, has created a cultural shift. The period around WWII was unarguably the climax of American nationalism. Since then, the counter culture left has seen its upward climb to prominence in America starting with the mid 1950’s. Similar shifts like this have happened all throughout history after major wars. One only must look at history to see that the rise of right wing ideologies is a direct response to social, economic and political dismay caused by a surge of leftist dominated culture.

Starting with the establishment of the U.N, the State of Israel and other catastrophic events such as the Korean/Vietnam Wars, the entire Western World has seen a rise in radical ideologies such as communism and Islamic terrorism. The resulting chaos from this struggle has seen a rise in fanatical opposition to Western policies as well as an increase in immigration from people seeking to enjoy the benefits of living in civilized societies. Naturally, some of these ideologies and cultural traditions are imported along with the immigrant populations which have caused changes to occur in the way of life of the people of all westernized, predominantly European-American nations. Other occurrences such as the Civil Rights Movement made a huge impact on the global perspective, launching leftist domination, making society sympathetic to their cause.

We can agree that rape, terror, usury, greed, degeneracy, lust, cheating….these things have all skyrocketed. The masses have been exposed to the powerful Marxist messages transmitted by the TV. Radical leftist US politicians have also emerged vastly in the 21st century. The Internet has had a meteoric rise in use during recent years, ideas now spread faster and faster. Out of the Internet, a new resurgence of right wing youth has sprouted around the Western World. These platforms have allowed for a rediscovering of nationalist and traditionalist roots among populations bombarded by multiculturalist liberal propaganda. The attitudes have been shifting election results to favor conservative, nationalist politicians.

The already fractured collective faces an enemy that is loosely organized. This enemy uses both Internet and other forms of media along with public activism as a means to combat our ideologies and spread their message. The enemy’s over-representation goes further than media. They also have the judicial system, entertainment and academia just to name a few. The enemy subverts the message of the right, causing more division among their numbers. There is now a new schism emerging, the split between the factions of those involved in internet and public activism. Despite the fact that the internet has been to a certain extent an effective tool in spreading the truth, the internet in many ways has become the global community’s controlled central forum. We must realize that the censorship of right wing ideas will not slow down. It’s important nevertheless to recognize that we will be most effective if we would use as many methods as possibly available to us towards demonstrating our rights. Organizations such as ADL and SPLC have joined Google and Facebook to proclaim their intentions to lobby for legislation limiting free speech in America.

The Police understands how much of an impact we can make in America, so much so that they will violate their oath to defend the constitution to stop us. They have already wasted taxpayer’s money investigating NJEHA because of the lawful advocacy of our ideas. During Unite the Right, they had a plan which they executed to quickly force anyone who had arrived at the same time as Jason Kessler to board a train towards downtown. Undoubtedly a few will be left behind since only in a perfect world everyone will arrive exactly on time. The Bus that Kessler chartered to pick up demonstrators at a certain location was a ploy, the location became quickly invaded by counter protestors which further added to the reduction of numbers as the many groups involved headed separately towards Vienna Station. At Vienna Station, the ones who arrived boarded trains with American flags on poles. The police even told the demonstrators that the poles were not permitted on the train or on Lafayette Park. This caused Jason Kessler to make some phone calls to no avail and members of the NJEHA to call out the violation of our rights. Pointing out when rights have been violated in public is key to exposing the deep state culture currently dominating the government.

We must learn from our European brothers. Groups such as the European Identitarians of Austria use the internet along with public demonstrations to much success. As our streets become invaded by those opposed to us and things like no go zones become a new reality for our people, it’s important we don’t believe that merely sitting at a desk will solve all our problems. Our once great societies are crumbling. Stand up for your race and organize men of European Heritage to simply show that we will not be undermined, polarized or replaced! Understand that the fact that we are being out-bred, replaced and ostracized globally is not a fear but reality. Understand the problems that Nations like South Africa, Zimbabwe and Haiti have faced. Realize the issues stemming from mass immigration in Europe, America and Australia. Wake up to the repercussions of third world migration. Know your history and most of all, defend your rights. Our founders created our rights to protect us and without our Bill of Rights we’d be nothing.