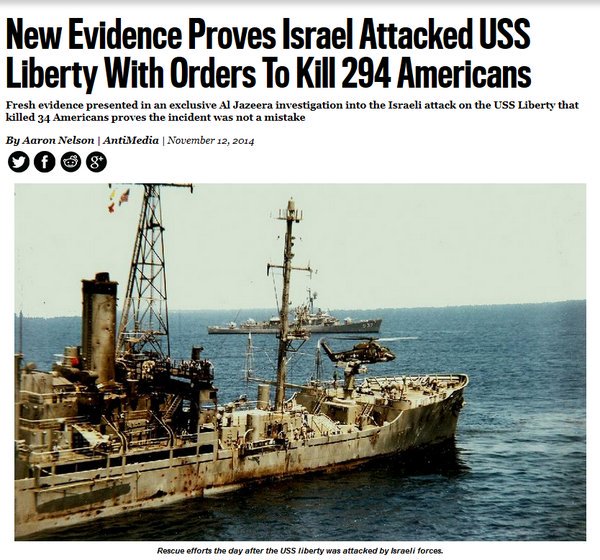 June 8th 1967 is a date which should be seared into the memory of every American Patriot. On this day the forces of international Zionism acting through the Jewish supremacist state of Israel launched a cowardly sneak attack against the unarmed American intelligence gathering ship the USS Liberty in the eastern Mediterranean.

Israel had begun its latest land grab against its Arab neighbors four days earlier and did not want its American ally to learn its battle plan.

At first light on that fateful day an Israeli reconnaissance plane flew slowly over the Liberty three times. The Jewish aircraft clearly observed the fact that the ship was unarmed, seeing the hull numbers identifying the Liberty as an American ship and the large American flag flying from its mast. The jews continued to fly recon missions over the Liberty the entire morning keeping a close watch on the ship and reporting back to their base that it was an American ship.

At 2pm that afternoon several Israeli jet fighters flew towards the Liberty and started firing rockets, 30 mm cannon ordnance, and dropping napalm on the ship's deck killing a large number of American sailors. The Jewish aircraft made pass after pass over the Liberty riddling it with explosive ordnance. Soon three Israeli torpedo boats joined in the vicious attack firing cannons at the ship and then launching a torpedo which made a direct hit below the Liberty's waterline and killing 22 American sailors immediately. But the gallant Liberty would not sink and the crew members fought back with the only weapons they had, 50 calibre machine guns.

Ultimately 34 American servicemen were slaughtered by the treacherous Zionist criminal state of Israel. No military reprisals were taken and the entire affair was quickly hushed up by the Jewish controlled mass media.

When the American  government is finally back under the control of Patriotic-Nationalist forces there will have to be consequences for the perpetrators of this foul act.

The NJEHA extends our heartfelt sympathy to the families of the brave men who were killed and to the heroic survivors who upheld the finest traditions of the American fighting Man. Know that this stain on our national Honor will not go unpunished.