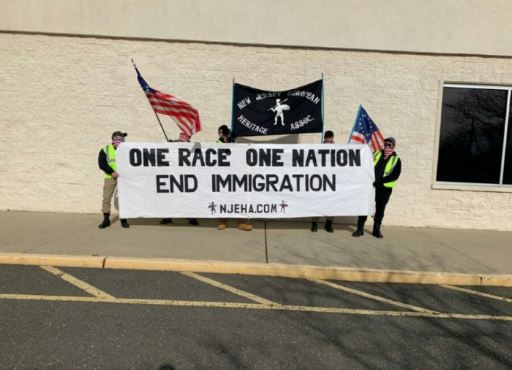 Members of our organization have been working hard in the past couple of years to distribute recruitment materials all across the State of New Jersey. We have even been able to reach parts of New York and Pennsylvania with our information. Our recruitment materials, In the form of simple flyers which do not promote any type of violence or illegal activity were noticed by many. Our message is simple: The once mighty Western Civilization is on the brink of a new dark age and the White European peoples are being led into genocide by those who we have admitted to be responsible (see Barbara Lerner Specter’s statements). After witnessing the flyers, some took to social media and local newspapers to sound the alarm. Eventually, a little bit of a frenzy was caused in some of the more left leaning communities we have canvassed in. When members of NJEHA attended the Unite the Right 2 Rally in Washington D.C last year, it put our organization on the radar of many of the enemies of freedom and liberty. Antifa and other neo-Bolshevik goon squads obviously took note. However, over the past 12 months or so we have been carefully tracked by the Anti Defamation League, an organization founded to defend Jewish pedophile Leo Frank who was convicted of the rape and murder of an underage white girl he was employing in Atlanta in 1913.

Coincidentally, after getting in the crosshairs of the ADL our group has also become the target of an investigation by the federally funded New Jersey Department of Homeland Security. We’d like to officially acknowledge that this investigation has been a complete waste of Taxpayer money as we have never engaged, planned to engage or promoted the engaging of any type of illegal activity.  It’s also evident to us that the ADL, who works closely with Law enforcement agencies have convinced officials that organizations which advocate for our cause are a danger to society and the safety of Americans. This is no secret and only shows the extent of reach as well as influence the ADL and Jewish people in general have inside American society. We believe this is only further confirmation that those who are responsible for our demise are indeed operating in a nefarious scheme to erase our people from the planet and exert their dominance over all those they plan to subjugate.

While the ADL definitely took note of our flyer activity, They also took note of our activities with Patrick Little; an advocate of White Americans from California who advised us and many others around the country to march in public areas holding simple signs saying “It’s Okay to be White” while remaining completely silent. We chose Princeton, NJ to be the site of this event. The goal and purpose of this event was to expose that even if we don’t say anything besides holding a simple sign, the enemies of our people will still create the conniving ruse that “racist evil Neo-Nazis” are marching into town. During this demonstration we did not actually even officially identify ourselves as the New Jersey European Heritage Association or reveal our identities and ideologies to the public. In fact for the record, we do not even consider ourselves “neo-nazis” and abhor that ridiculous terminology as another attempt to discredit our message.

The Jewish members of Princeton visibly took disgust to our message, just as Patrick Little had prognosticated. One Jewish man called us “F***ing Nazis” as he spit on the ground before us. Another Jew yelled “Jews do want to replace you” as he drove by in a rental truck. However, it was the Princeton School teacher Martha Friend who began to follow us around while hurling taunting messages towards our members and attempting to convince other community members to react to us with palpable disapproval. Ms. Friend harassed and followed us while live streaming on social media until we arrived to the vehicle we used to transport our members to Princeton. She then took photographs of the vehicle and posted them on social media in another attempt to instigate a reaction of some sort. This woman has access to young children and it has been also discovered that she openly promotes the terrorist organization Black Lives Matter, Which is responsible for the murder of Dallas Police officers as well as civil unrest across the nation.

The march nevertheless caused National attention. YouTube immediately flagged the video as inappropriate. Many across the country spewed their anti-white hatred towards our actions. The reaction was so intense that our members actually found it quite amusing to see how much dominion we had over the lives of others just for promoting our race. We also realized how much fear our simple message really causes. This prompted us to create the illusion that we would be holding another IOTBW march. This time we put up flyers promoting it around Princeton. Of course we never intended to hold this event but a wicked Army of Trust funded, gated community communists believed we would anyway. Immediately, Antifa expanded their attack on our organization. Using information from Ms. Friend they were able to dox the leader of our organization. He has subsequently received dozens of calls with threats of violence and vandalism to his home as well as place of employment. Somehow they obtained his address and using the picture of the vehicle published by Ms. Friend on social media, individuals were able to identify his vehicle and vandalized it by slashing the tires. He received a text message from an unknown number asking “Did you make it to the rally okay?” Eventually, the phone calls to his employer threatening violence caused his employer to give into the thuggish intimidation. He has been terminated and since is currently still unemployed.

The violent henchmen, believing we would show up to march organized a counter demonstration against us. When we didn’t show up, they immediately believed they gained some type of victory. Our organization doesn’t capitulate to intimidation and we will march when and where we want as we still have the rights to do so. We recently hung banners over 2 highway overpasses and we are planning another park clean up when the weather warms up again soon. We have traveled all over the state where we have encountered like-minded organizations which we will work closely with to advance the cause and promote awareness. Recently flyers have been posted in towns we have never canvassed such as Newton, Dover, Englewood, Tenafly, Madison, Bordentown, Toms River, Seaside Heights and Asbury Park.

We also don’t submit to journalistic slandering. As we have recently seen with the Covington Catholic schoolboy incident and the Jussie Smollet purported hoax “lynching”, the media has definitely been on a tirade to twist an anti-white narrative into the public spotlight. They will of course use any opportunity possible to demonize white Americans and will continue to attempt to do control the narrative. Recently, the Star Ledger which is owned by the Jewish Newhouse Family published a piece on their NJ.com website where they claimed that our organization was deemed a high priority terror risk. Again, we reiterate that this course of action was taken by the state DHS to pander to their Jewish masters. We were even put on as a higher threat level than Al Qaeda and Antifa gang members. This is absolutely ridiculous as we only perform protected first amendment activity, park clean ups and community outreach. Their goal is obviously to create Police opposition to our activities wherever we go.

As the collapse of society continues accelerating, New Jersey European Heritage Association continues to grow. Our powerful message resonates with more and more American patriots all over the nation. We have received inquiries from multiple states and even have support overseas. We’ll continue to struggle against our enemy’s attempts to discredit and eradicate us. A recent stream of our Leader, Titus discussing his situation can be heard on the DoomGuard YouTube channel here:

https://youtu.be/X2dcWvbRseY We would like to thank everyone who has supported us and look forward to more to come.